Skip to the content
Garden Products»Plants A to Z»How to Grow and Care for Weeping Bottlebrush
As an Amazon Associate I earn from qualifying purchases. Learn more

The weeping bottlebrush is a fast-growing tree with firework-like crimson blossoms and cascading branches. The cylindrical, bristle-like red flowers are most visible in the spring and summer, although they can also be seen in the fall.

Hummingbirds, bees, and butterflies are attracted to the beautiful, conspicuous stamens on these prickly blossoms. Its spherical, firm, brown fruits are attractive to little animals, who eat them.

The evergreen leaves of the Red Cascade, as this tree is also known, are thin and gray-green in hue. A matted gray-green bark covers the weeping branches.

Weeping bottlebrush trees require very little upkeep once established. They can withstand dryness and are relatively salt-tolerant, but they can’t survive significant volumes of salty spray near the ocean. These stunning trees will grow with plenty of sunshine and the occasional watering and fertilizer.

Disease and pest resistance are common in the weeping bottlebrush. Witches’ broom, mites, insect galls, and root rot are the most common issues. They are resistant to deer. The deep, matting root system of this tree makes it ideal for erosion management.

Weeping bottlebrushes require direct sunlight to thrive. These trees do not shade tolerant, and if planted in a location with only partial sun, they will not bloom as profusely.

Soggy soil can quickly lead to root rot; thus, it’s critical to have well-draining ground. These trees prefer sandy, loose soil that allows the root system to freely mat. Alkaline soils can cause yellow leaves, so it’s better to have a slightly acidic to neutral soil pH.

Watering the weeping bottlebrush regularly will maintain it healthy and vigorous. Mature plants can tolerate droughts, but they do better with more water. When the earth seems dry several inches below the surface, water infrequently.

Red cascade trees love warm weather and are sensitive to cold and frost. They thrive in hot, dry regions, but can also thrive in humid environments.

Providing well-balanced fertilizer to weeping bottlebrush trees throughout the growing season will promote healthy development and blossoming. From spring to fall, apply at the beginning of each season.

Pruning can keep this tree looking tidy and well-kept. After flowering, prune weeping bottlebrush trees to remove spent blossoms and preserve the tree in good form.

Semi-mature wood cuttings taken in the summer are very easy to reproduce into weeping bottlebrush trees. Sharp garden snips, a tiny pot, moist potting soil, rooting hormone, a plastic bag, and a rubber band are all things you’ll need. Then follow the steps below:

How to Start Planting Weeping Bottlebrush From Seed

Weeping bottlebrush trees can be grown from seed as well. Seeds should be started in the early spring because they take longer than cuttings. This is how you do it:

Weeping bottlebrush trees thrive in containers, making them an excellent choice for large container gardens. To allow for several years of growth, use a container at least 8 inches larger than the root ball. When planting, make sure the container has lots of drainage holes so that the soil may drain adequately. To offer the essential nutrients, fertilize the plant in the spring and summer.

When the weeping bottlebrush has outgrown its container, carefully tip it onto its side to remove the root system, then slide the plant out. Fill a larger container with well-draining soil and place the plant inside. Water thoroughly after burying the root system to the same level as before.

Overwintering is not necessary for the weeping bottlebrush because it is grown in warm regions. Simply stop using fertilizer. Weeping bottlebrush trees grown outside of their growing zones must be kept in containers and transported to a safe location, such as a garage or greenhouse.

How to Make a Blooming Weeping Bottlebrush

Bright red, 3- to 5-inch blooms with spectacular, spiky stamens will be produced by these trees. These can be found from spring to summer and then occasionally thereafter. If you want to encourage blossoming, water your plants regularly. Fertilize at the start of the spring, summer, and fall seasons. A few weeks before flowering begins, use a high-phosphorus fertilizer to ensure a plentiful, vivid bloom. To encourage continued flowering, deadhead the blooms as they fade.

The Most Common Issues With Weeping Bottlebrush

Weeping bottlebrush trees are fairly durable and rarely cause problems. Even hardy plants, however, can experience problems from time to time. Witches’ broom is the most common problem with these trees.

Broom of the Witches

A dense, spherical form of twigs growing from the branches of a tree is known as a witches’ broom. When a tree is stressed, it produces a knotty, nest-like structure by sending out several shoots in the same branch location. Insects, such as mites, are a typical source of stress. To deal with witches’ broom, attempt to pinpoint the source of stress and eliminate it. Then, if at all possible, take away the witches’ broom. 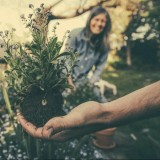